The latest euro-area unemployment figures, released on July 31st, make for mildly happy reading. They show the overall unemployment rate has crept down to 11.1% from its peak of 12.1% in April 2013. Despite the good news, another problem in the form of long-term unemployment (generally defined as being out of work for over 12 months) has emerged in the nineteen-member currency union. Of the 19m jobless Europeans, more than half have not worked for the last year. And over 15% have not had a job for more than four years. Unsuprisingly, the problem is most severe in southern Europe where a protacted crisis pushed up overall unemployment, and with it long-term joblessness. But in contrast the number of people who have been looking for work for a long time in America fell when its economy recovered; the long-term joblessness rate now sits slightly above 20% of the total. So why is it so tough for Europeans to get back to work? 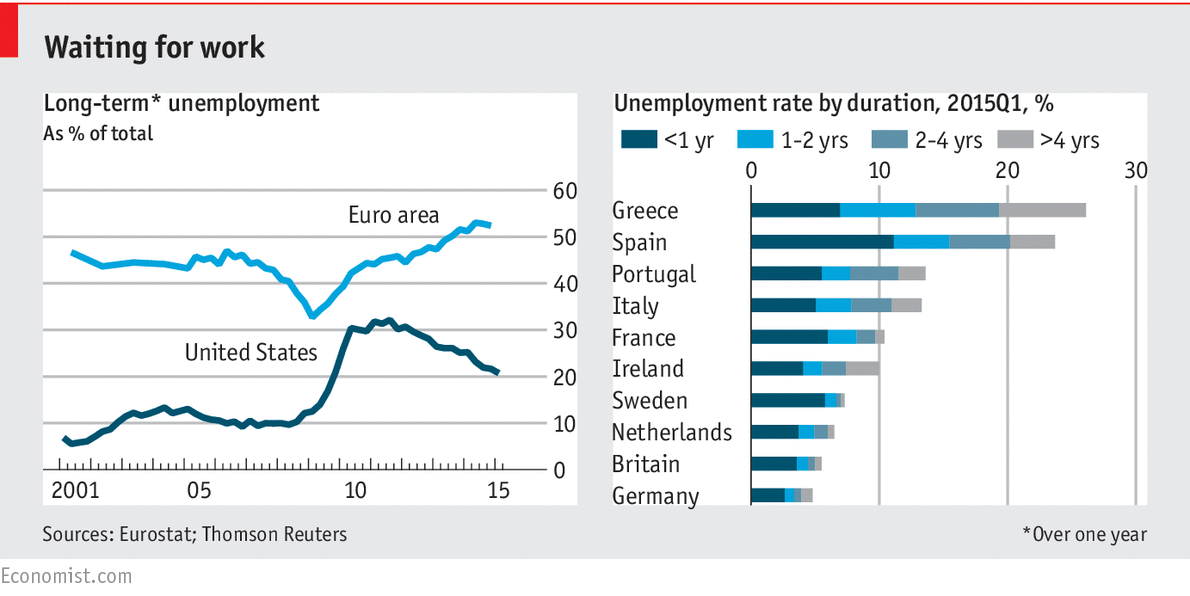 Part of the reason lies in labour mobility. Almost 30% of Americans reside in a different state to the one in which they were born. But a mere 2.8% of Europeans have moved to a different country in the EU. Language barriers, cultural differences and non-transferable qualifications make it much harder for them to upsticks to find a new job. Generous unemployment benefits in Europe also tie would-be workers to one place and make getting work less urgent. In most American states jobless workers qualify for only 26 weeks of unemployment benefits (though this was increased between 2008 and 2013). Many euro-area countries support the unemployed for more than a year.

Another factor in the divergent long-term unemployment rates is a higher job turnover in America than in Europe. Numbers from the International Labour Organisation, a UN body, suggest that between 2008 and 2012 the probability of moving into employment within the next month was around 7% for Europeans and 12% for Americans. And the chances losing your job within the next month was 0.8% and 1%, respectively. The quicker churn means available work is spread out among the population so skills are kept sharper and spirits higher. It is not all bad news for the euro area, though. One cause of the differing joblessness rate is actually a symptom of a healthier labour market in Europe. Unemployment is falling in America partly because discouraged workers are dropping out of the labour force. In Europe the opposite is true: the workforce has actually grown, which pushes up unemployment rates. 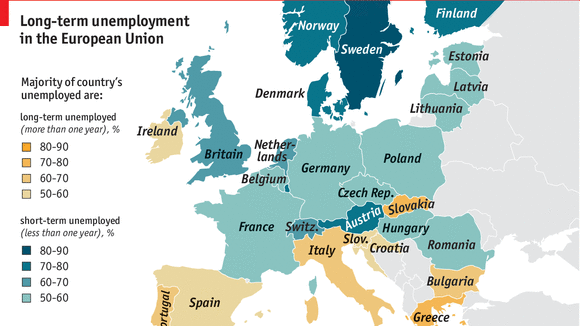 But all this bodes ill for single currency. Long-term unemployment can be self-sustaining: the longer someone is out of work the harder it is to get back in. Other difficulties arise too. Fertility rates, already falling in Europe, tend to drop off and life expectancy can decline when joblessness rates are high. The problem is not universal though.

Denmark and Germany have kept both long-term and overall unemployment low through job training programmes, flexible labour laws and education.

Southern European countries, where the problem is worst, should look north for inspiration.