The causes and effects of the global financial crisis 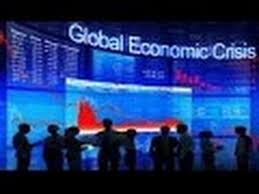 The effects of the financial crisis are still being felt, five years on.

This article, the first of a series of five on the lessons of the upheaval, looks at its causes.

I. It took huge taxpayer-financed bail-outs to shore up the industry.
The collapse of Lehman Brothers, a sprawling global bank, in September 2008 almost brought down the world’s financial system. It took huge taxpayer-financed bail-outs to shore up the industry. Even so, the ensuing credit crunch turned what was already a nasty downturn into the worst recession in 80 years. Massive monetary and fiscal stimulus prevented a buddy-can-you-spare-a-dime depression, but the recovery remains feeble compared with previous post-war upturns. GDP is still below its pre-crisis peak in many rich countries, especially in Europe, where the financial crisis has evolved into the euro crisis. The effects of the crash are still rippling through the world economy: witness the wobbles in financial markets as America’s Federal Reserve prepares to scale back its effort to pep up growth by buying bonds.

With half a decade’s hindsight, it is clear the crisis had multiple causes. The most obvious is the financiers themselves—especially the irrationally exuberant Anglo-Saxon sort, who claimed to have found a way to banish risk when in fact they had simply lost track of it. Central bankers and other regulators also bear blame, for it was they who tolerated this folly. The macroeconomic backdrop was important, too. The “Great Moderation”—years of low inflation and stable growth—fostered complacency and risk-taking. A “savings glut” in Asia pushed down global interest rates. Some research also implicates European banks, which borrowed greedily in American money markets before the crisis and used the funds to buy dodgy securities. All these factors came together to foster a surge of debt in what seemed to have become a less risky world.

II. Starting with the folly of the financiers.

The years before the crisis saw a flood of irresponsible mortgage lending in America. Loans were doled out to “subprime” borrowers with poor credit histories who struggled to repay them. These risky mortgages were passed on to financial engineers at the big banks, who turned them into supposedly low-risk securities by putting large numbers of them together in pools. Pooling works when the risks of each loan are uncorrelated. The big banks argued that the property markets in different American cities would rise and fall independently of one another. But this proved wrong. Starting in 2006, America suffered a nationwide house-price slump.

The pooled mortgages were used to back securities known as collateralised debt obligations (CDOs), which were sliced into tranches by degree of exposure to default. Investors bought the safer tranches because they trusted the triple-A credit ratings assigned by agencies such as Moody’s and Standard & Poor’s. This was another mistake. The agencies were paid by, and so beholden to, the banks that created the CDOs. They were far too generous in their assessments of them.

Investors sought out these securitised products because they appeared to be relatively safe while providing higher returns in a world of low interest rates. Economists still disagree over whether these low rates were the result of central bankers’ mistakes or broader shifts in the world economy. Some accuse the Fed of keeping short-term rates too low, pulling longer-term mortgage rates down with them. The Fed’s defenders shift the blame to the savings glut—the surfeit of saving over investment in emerging economies, especially China. That capital flooded into safe American-government bonds, driving down interest rates.

Low interest rates created an incentive for banks, hedge funds and other investors to hunt for riskier assets that offered higher returns. They also made it profitable for such outfits to borrow and use the extra cash to amplify their investments, on the assumption that the returns would exceed the cost of borrowing. The low volatility of the Great Moderation increased the temptation to “leverage” in this way. If short-term interest rates are low but unstable, investors will hesitate before leveraging their bets. But if rates appear stable, investors will take the risk of borrowing in the money markets to buy longer-dated, higher-yielding securities. That is indeed what happened.

III. From houses to money markets, a chain reaction exposed fragilities in the financial system.

When America’s housing market turned, a chain reaction exposed fragilities in the financial system. Pooling and other clever financial engineering did not provide investors with the promised protection. Mortgage-backed securities slumped in value, if they could be valued at all. Supposedly safe CDOs turned out to be worthless, despite the ratings agencies’ seal of approval. It became difficult to sell suspect assets at almost any price, or to use them as collateral for the short-term funding that so many banks relied on. Fire-sale prices, in turn, instantly dented banks’ capital thanks to “mark-to-market” accounting rules, which required them to revalue their assets at current prices and thus acknowledge losses on paper that might never actually be incurred.

Trust, the ultimate glue of all financial systems, began to dissolve in 2007—a year before Lehman’s bankruptcy—as banks started questioning the viability of their counterparties. They and other sources of wholesale funding began to withhold short-term credit, causing those most reliant on it to founder. Northern Rock, a British mortgage lender, was an early casualty in the autumn of 2007. 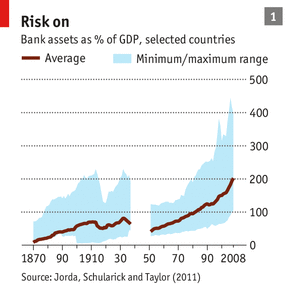 Complex chains of debt between counterparties were vulnerable to just one link breaking. Financial instruments such as credit-default swaps (in which the seller agrees to compensate the buyer if a third party defaults on a loan) that were meant to spread risk turned out to concentrate it. AIG, an American insurance giant buckled within days of the Lehman bankruptcy under the weight of the expansive credit-risk protection it had sold. The whole system was revealed to have been built on flimsy foundations: banks had allowed their balance-sheets to bloat (see chart 1), but set aside too little capital to absorb losses. In effect they had bet on themselves with borrowed money, a gamble that had paid off in good times but proved catastrophic in bad.

IV. Regulators asleep at the wheel, failures in finance were at the heart of the crash.

Failures in finance were at the heart of the crash. But bankers were not the only people to blame. Central bankers and other regulators bear responsibility too, for mishandling the crisis, for failing to keep economic imbalances in check and for failing to exercise proper oversight of financial institutions.

The regulators’ most dramatic error was to let Lehman Brothers go bankrupt. This multiplied the panic in markets. Suddenly, nobody trusted anybody, so nobody would lend. Non-financial companies, unable to rely on being able to borrow to pay suppliers or workers, froze spending in order to hoard cash, causing a seizure in the real economy. Ironically, the decision to stand back and allow Lehman to go bankrupt resulted in more government intervention, not less. To stem the consequent panic, regulators had to rescue scores of other companies.

But the regulators made mistakes long before the Lehman bankruptcy, most notably by tolerating global current-account imbalances and the housing bubbles that they helped to inflate. Central bankers had long expressed concerns about America’s big deficit and the offsetting capital inflows from Asia’s excess savings. Ben Bernanke highlighted the savings glut in early 2005, a year before he took over as chairman of the Fed from Alan Greenspan. But the focus on net capital flows from Asia left a blind spot for the much bigger gross capital flows from European banks. They bought lots of dodgy American securities, financing their purchases in large part by borrowing from American money-market funds.

In other words, although Europeans claimed to be innocent victims of Anglo-Saxon excess, their banks were actually in the thick of things. The creation of the euro prompted an extraordinary expansion of the financial sector both within the euro area and in nearby banking hubs such as London and Switzerland. Recent research by Hyun Song Shin, an economist at Princeton University, has focused on the European role in fomenting the crisis. The glut that caused America’s loose credit conditions before the crisis, he argues, was in global banking rather than in world savings.

Moreover, Europe had its own internal imbalances that proved just as significant as those between America and China. Southern European economies racked up huge current-account deficits in the first decade of the euro while countries in northern Europe ran offsetting surpluses. The imbalances were financed by credit flows from the euro-zone core to the overheated housing markets of countries like Spain and Ireland. The euro crisis has in this respect been a continuation of the financial crisis by other means, as markets have agonised over the weaknesses of European banks loaded with bad debts following property busts.

Central banks could have done more to address all this. The Fed made no attempt to stem the housing bubble. The European Central Bank did nothing to restrain the credit surge on the periphery, believing (wrongly) that current-account imbalances did not matter in a monetary union. The Bank of England, having lost control over banking supervision when it was made independent in 1997, took a mistakenly narrow view of its responsibility to maintain financial stability.

Central bankers insist that it would have been difficult to temper the housing and credit boom through higher interest rates. Perhaps so, but they had other regulatory tools at their disposal, such as lowering maximum loan-to-value ratios for mortgages, or demanding that banks should set aside more capital.

Lax capital ratios proved the biggest shortcoming. Since 1988 a committee of central bankers and supervisors meeting in Basel has negotiated international rules for the minimum amount of capital banks must hold relative to their assets. But these rules did not define capital strictly enough, which let banks smuggle in forms of debt that did not have the same loss-absorbing capacity as equity.

Under pressure from shareholders to increase returns, banks operated with minimal equity, leaving them vulnerable if things went wrong. And from the mid-1990s they were allowed more and more to use their own internal models to assess risk—in effect setting their own capital requirements. Predictably, they judged their assets to be ever safer, allowing balance-sheets to balloon without a commensurate rise in capital (see chart 2).

The Basel committee also did not make any rules regarding the share of a bank’s assets that should be liquid. And it failed to set up a mechanism to allow a big international bank to go bust without causing the rest of the system to seize up.

IV. The long period of economic and price stability over which they presided encouraged risk-taking.

The regulatory reforms that have since been pushed through at Basel read as an extended mea culpa by central bankers for getting things so grievously wrong before the financial crisis. But regulators and bankers were not alone in making misjudgments. When economies are doing well there are powerful political pressures not to rock the boat. With inflation at bay central bankers could not appeal to their usual rationale for spoiling the party. The long period of economic and price stability over which they presided encouraged risk-taking. And as so often in the history of financial crashes, humble consumers also joined in the collective delusion that lasting prosperity could be built on ever-bigger piles of debt.